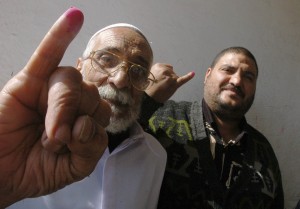 For the 2005 presidential and parliamentary elections in Egypt, Schnellinger designed, wrote the proposal for and managed Voter Voices. This project brought together journalists from Cairo, Alexandria and rural Egypt to learn new reporting techniques based on democratic ideals.

The international team and Egyptian co-trainers and editors worked with reporters to produce a national, stratified-sample survey of Egyptians and used what voters said to report stories on the issues that they cared about. These stories were published with a side-by-side comparison of the presidential candidates based on their answers to questions from voters.

The content was published online and in a print supplement in Arabic; 500,000 copies were distributed across the country. The team also organized pool coverage to do breaking news on election day. The project continued into sessions for the subsequent parliamentary elections.

This project was so successful that Schnellinger was invited to submit a proposal for a follow-up project. She designed and wrote the proposal and initial planning documents for the Virtual Newsroom project, which worked online to bring together Egyptian bloggers, journalists, and international mentors.